After becoming a single mother, Amanda worked her hardest to provide for her children, including her human child and their two sweet Rottweilers, Roxie and Rip. At just six months old, Rip was the newest addition to the family, and though Roxie was only three years old, she had become vital to the whole family’s wellbeing.

Life had thrown Amanda more than her share of tough breaks in the last year. Without Roxie’s calming presence, Amanda had no idea how she could have gotten through the death of both of her parents, followed by a difficult breakup soon after. As painful as it was to adjust to her losses, she also had to contend with the rising cost of living that had spread to every corner of her budget; despite her well-paying job as a social worker, it was a constant battle to keep her household afloat. Amidst these struggles, slobbery Rottweiler kisses were a welcome reward after long, worrying days.

Roxie’s eyes had troubled her from the day Amanda brought her home as a puppy. As is common with Rottweilers, she suffered from entropion in both eyes, where both the upper and lower eyelids would turn inward and cause irritation. Amanda had tried all manner of eye creams, and even prescription allergy medication and dog food on the veterinarian’s suggestion that it could simply be allergies.

But Roxie’s eyes continued to worsen over the years, becoming intolerable at the beginning of 2022 – swollen, ulcerated, and oozing. The pain was so great that even sunlight hurt, and Roxie, despite all her love and trust in Amanda, refused to have her eyes cleaned. Surgery was the only remaining option.

After how hard Amanda had worked to not only keep her head above water but also pay off debts over the past year, she was reluctant to pay for Roxie’s surgery on credit. Life had been unpredictable lately, and she would be charged exorbitant interest fees if she couldn’t make the payments. At the same time, her budget had become so tight that it would take far too long to save up enough money, and Roxie didn’t couldn’t bear another day in pain. 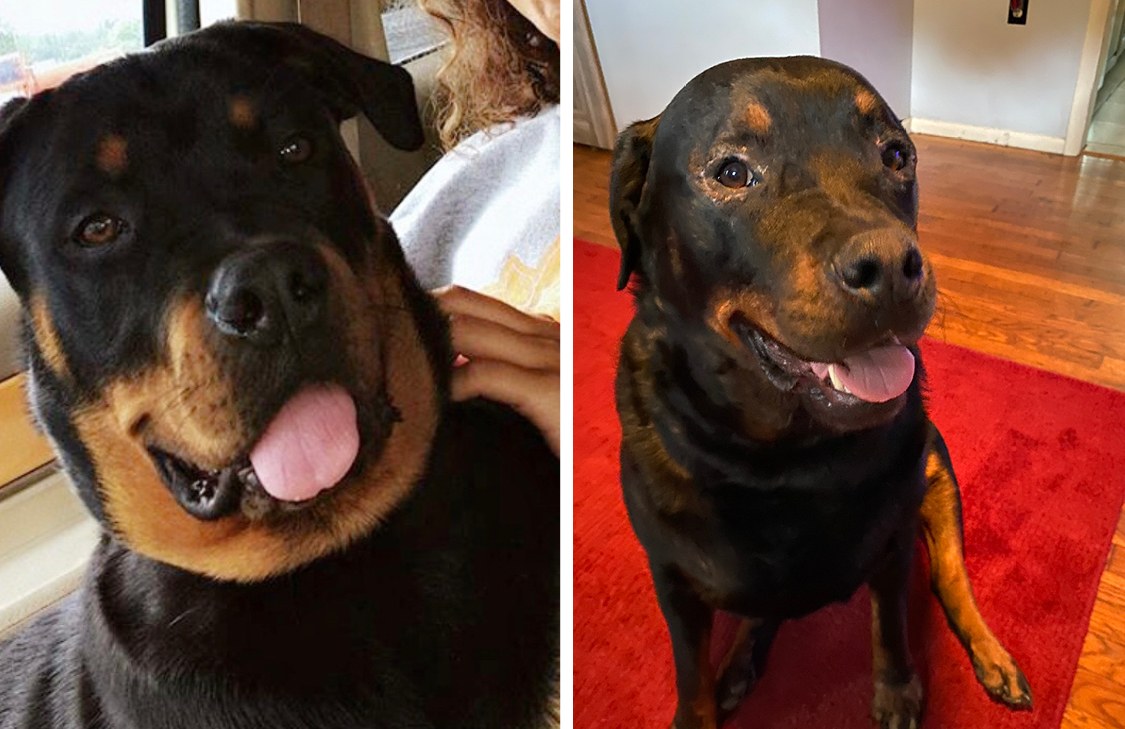 Amanda wasn’t sure if her situation qualified for help, but she thought it couldn’t hurt to ask and she was prepared to try anything to help sweet Roxie. She was overjoyed to learn that her application for a RedRover Relief Urgent Care grant had been approved and that she would be able to pay for the entropion surgery. Best of all, Roxie would soon be able to enjoy warm sunshine again.

Roxie emerged from surgery with sleepiness still in her eyes but the pain had gone, and the whole family could begin to put the misery of the past few years behind them. Between her work, watching the rambunctious pup Rip, raising her child, and caring for Roxie, Amanda took a moment to share this happy update with us:

“Thank you guys so much for helping with Roxie’s surgery…she’s doing great! She’s not completely healed up yet but she’s been the best patient. She just got her stitches removed yesterday. Your assistance was a huge blessing to us! Roxie says thank you for your help!”

We are so thankful for opportunities like these to help families when they need it most, and we couldn’t have done it without kindhearted people like our supporters Thank you for putting your compassion into action for animals like Roxie and for bringing this family from crisis to care!